Today, the question "What do you invest in?" surprises few people, but it's actually a relatively young phenomenon. Fifty years ago, a small number of financiers invested in the stock market. Today, anyone can do it by downloading an app. A similar revolution is occurring in the private equity market.

From trading floor to digital finances

According to the World Bank, in 1979 the total volume of securities trading was just over $600 billion. Ten years later, in 1989, it was ten times higher. The absolute record was set in 2015, when the stock market turnover exceeded $100 trillion.

The advent of the age of finance was spurred by tech solutions. The digitalization of this industry started somewhere in the early 1970s, when the Nasdaq stock exchange began operations in the United States, running entirely on a computer network. By the early 1990s, more than 40% of all transactions were made using online tools.

That’s when the first trading platforms popular among investors appeared, such as Globex or E-Trade. They provided access to stock market data and had all the instruments required for trading. However, registration with them proved a convoluted process, and serious skills were required to use them effectively.

Stock trading was still the turf of a relatively small percentage of people. However, the number of users on trading platforms grew at a rate comparable to the spread of the Internet. Though the 2000s came with two hard hitting financial crises, they demonstrated that the interest in stock investments among ordinary people would only grow

The breakthrough for investment technologies came after the COVID-19 pandemic lockdown in 2020, with a staggering and unprecedented amount of liquidity inflows into the U.S. stock market. Stock prices soared, as did the popularity of investments themselves.

Reuters’ feature sums up the results of 2020 for the stock market. According to the agency, the share of retail investors in the total volume of securities trading increased to more than 25%, from 17%. The total number of accounts of the six largest brokerage firms in the U.S. (Fidelity, Vanguard, Schwab, Webull, Robinhood, Interactive Brokers) exceeded 100 million.

One of the above companies, Robinhood, should be grabbing your attention now. The company was founded in 2014 and, unlike the “old” brokers, its business model targeted retail investors from the outset. Not surprisingly, Robinhood got a fair share of the market “pie” after the massive influx of retail investors.

Robinhood’s flagship product is an app with the simplest possible interface. It takes all the hassle out of the stock trading process and is made easy even for those who had no previous trading experience at all.

The company’s bet on the growing retail trading segment proved the right strategy. If Robinhood had nearly 500,000 users in 2015, its customer base swelled to 13 million and 22.5 million by 2020 and 2021 respectively. This is how just one mobile app led a revolution in stock trading.

Why venture investments are not about startups anymore

But the stock market’s cheerful statistics makes the equally important sphere, the private equity market, take a back seat. In recent years it has also transformed from a narrow segment into a large-scale phenomenon. Let’s take, for example, the VC space. 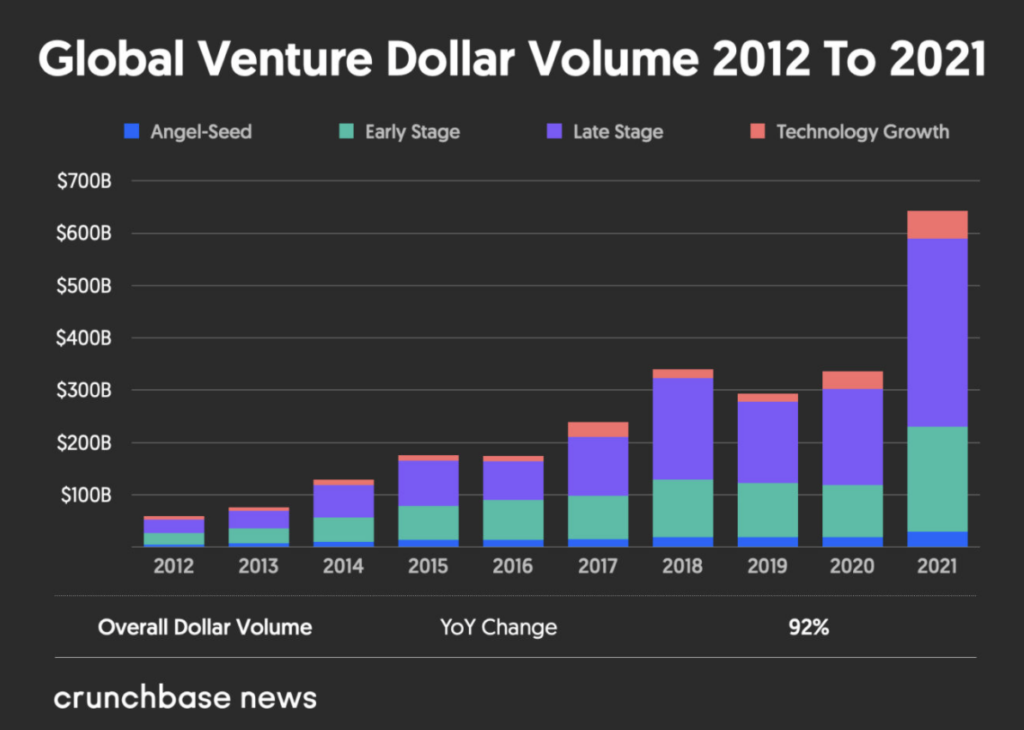 By 2021, the share of mega-deals, rounds totaling more than $50 million, had increased significantly, to 83% of the total volume of VC investments. In 2006, this number was only 26.8%. Also in 2021, the number of deals with later-stage private companies grew by 47%, accounting mostly for these mega-deals.

The US now has many more unicorns — private companies valued at $1 billion or more — 340 in 2021 versus 100 in 2020. That same year Crunchbase for the first time recorded more than 1,000 unicorn companies in the world.

And, as practice demonstrates, sooner or later such companies go public. Massive interest in private companies that go public is indicated by the number of IPOs: in 2020, according to Nasdaq, companies held 464 initial public offerings, leveling with 2000. And in 2021, the United States saw an all-time record for the number of IPOs: 958. 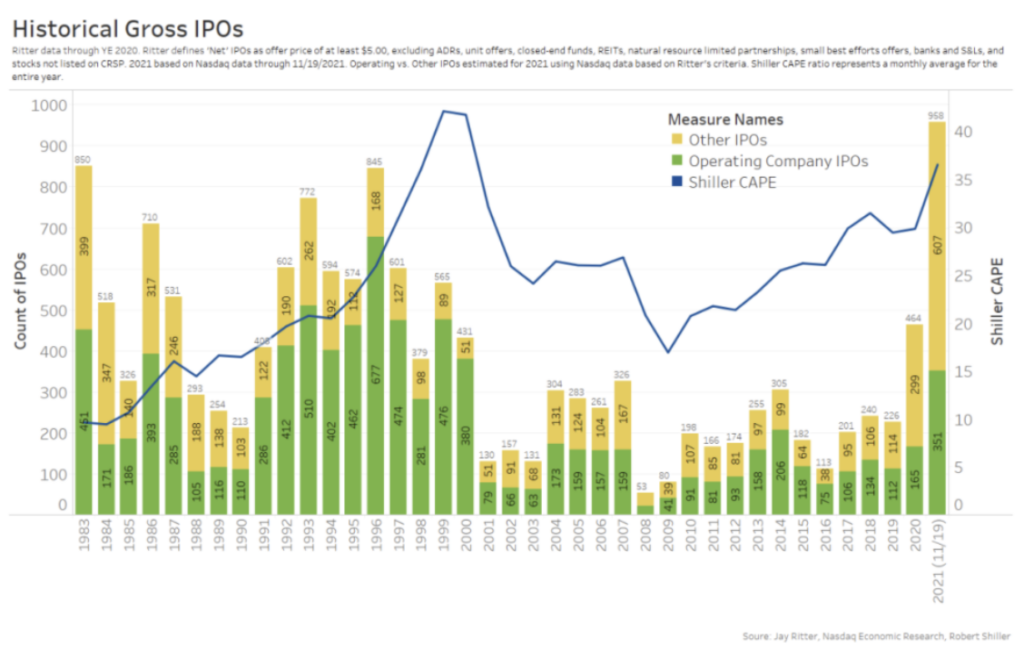 Portfolio from private companies — on your smartphone

The private equity market has become larger and more dynamic, and retail investors are no longer afraid of investing in private companies. This trend is supported by the growing popularity of equity crowdfunding, which has changed the approach to innovation funding. Mobile services have already emerged in this segment, allowing businesses to raise funds from private investors.

According to Pitchbook, investments in large private companies, such as Chime, SpaceX, and Impossible Foods, are gaining popularity at a much slower pace. The traditions of venture capital funds are still strong here that have individual capitalists assemble their small funds and invite a narrow circle of private investors to invest.

However, this market will soon be swept by new technologies capable of making private equity investments as easy and accessible to ordinary investors as possible. Apparently, it will again take the form of a mobile app. B2B platform Forge Global has already announced its intentions to create such a product. In August 2021, Y Combinator financed Aqua, a young platform for venture investments. And in early March 2022, Dizraptor, one of the first private equity mobile apps, became available on AppStore and Google Play.

According to Dmitry Belousov, CEO of Dizraptor, private disruptive companies are key to investors today:

“We’ve been trading on the stock market for 15 years and investing in technologies that will be trending tomorrow. A few years ago we changed our focus from stock markets to private markets, and it’s already paying off.

We are seeing huge interest from investors in getting private equity recently. But the services through which they can invest are so complex they are basically accessible only to professionals. This is a false limitation: today, regulations allow at least accredited investors to invest in private equity – only in the US alone, according to the SEC, their number exceeded 16 million in 2019.

So we created a mobile app where you can build a portfolio from stocks in such companies as Impossible Foods, Calm, Neuralink or StoreDot. We select companies from approximately 30 disruptive industries.

We estimate the total market size for industries such as foodtech, edtech, space, synbio, remote jobs, cancer diagnostics, human longevity, creator economy and metaverse will increase by 7.5x between 2021 and 2030. According to Ark Invest’s Big Ideas for 2030, the overall Disruptive Innovation Technologies market will grow from $14T today to $210T in 2030 – a growth of 15x in 10 years.”

VC is still the “engine” of innovative companies. Previously, VC interests were limited to the IT sector, but today they invest in companies introducing new technologies in medicine, engineering, robotics, biology and even space. These companies remain private for longer, and it is increasingly easier for them to raise large capital, as shown by the rising number of unicorns.

The activity on the private equity market will continue to grow. Granted, those who will be among the first to get a handle on new investment services will win. Now it is important to try and compare what’s out there: Dizraptor app can be downloaded already now, while you should also be looking at other apps to come. If you are investor, don’t miss the coming trend.