A primal societal fear can cause a public panic beyond reason. It’s not bad. It can motivate.

In 1938, American audiences were fearful of falling victim to Japanese militarism, Bolshevism, or Nazism.

When they heard a radio adaptation of the 19th century novel “War of the Worlds”, public panic that a Martian invasion was real shut down phone switches and electrical grids even thousands of miles away from the apparent New York City invasion. 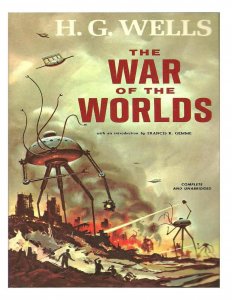 War of the Worlds

Though it was probably impossible to gauge public reaction in Stalinist Russia, “Alexander Nevsky” – a 1938 propaganda masterpiece describing, allegedly, a 13th century Teutonic invasion – is chilling to this day.

Bitcoin is one of the most positive developments of the millennium and will, I believe, continue to foster trade and human relations. However, the genesis of its popularity is a fear of societal collapse.

Today, Bitcoin (BTC) is a $166 billion market phenomenon, and the whole cryptocurrency market is worth $248 billion. As technically remarkable as BTC is, it still must have touched some deep societal nerve to grow so quickly before greed took over in 2016.

Peoples’ fear in 2008 was not so irrational. We’ve had many historic examples and two contemporary examples of how terribly things end when the government resorts to money printing to paper over its problems.

At the darkest end of the spectrum was Weimar Germany’s hyperinflation which heralded Nazism, the Holocaust, and the slaughter of 50 million people in Europe.

The starvation of Venezuela

However, you don’t have to go a century back. You have now, in 2019, the starvation of Venezuela – the country with the largest petroleum reserves in the world.

Also, the Zimbabwe I saw as a very young person in 1985 was harmonious and rich in nature. Now, it is unrecognisable due to dictatorship and hyperinflation.

This might all explain an irrational spike in BTC when it first launched, but the truth is this “bubble” has gone on for 12 years. Currently, the government executives who are supposed to be the most responsible are not.

In Europe, September 12 2019, the Governing Council of the ECB took the following monetary policy decisions:

In the USA, the world’s reserve currency is run by the federal reserve, whose increased role in the US economy and financial system is more than disturbing.

Japan, whom people might have justifiably feared taking over the world in the 1980s, seems to have transformed itself into a banana republic of capitalism. While the economy and culture is still shockingly impressive, its debt is 223% of its economy.

Which brings us back to Bitcoin…

If phases of death psychology include anger, denial, and acceptance, BTC has its own path: fear, greed, and discovery.

People were justifiably scared a decade ago of complete financial collapse. Lingering fears about the major economic zones and liberal democracies in Japan, the USA, and the EU are rational.

Of course, everybody loves to gamble, and the 2017 price spike proved irresistible to droves of investors and speculators. It was also a goldmine for fraud artists.

Now, all sorts of wonderful things are happening.

Bitcoin is facilitating international trade for small companies, for instance, who can now pay foreign contractors without the usual hang-ups. African entrepreneurs are making money trading electronic and other goods. There are opportunities for 20-year-olds that their seniors would never have experienced.

Looking at hash rates and cryptography would bore most people to death. However, a healthy dose of fear, greed, and eventual mistrust gave birth to something wonderful.

Keep your eyes on Bitcoin. Its emotional birth led to a global transformation that is only in its infancy.