US President Donald Trump had dinner with Mark Zuckerberg when the tech titan testified before Congress about Facebook’s proposed cryptocurrency Libra.

Trump met the social media mogul and Facebook board member Peter Thiel, a major donor to Trump’s campaign and a major recipient of government contracts, at the White House in October, reports NBC.

A Facebook spokesperson told the broadcaster: “As is normal for a CEO of a major US company, Mark accepted an invitation to have dinner with the President and First Lady at the White House.”

The meeting was not disclosed publicly and the White House refused to comment on what the three men discussed.

Zuckerberg also met with the president in the Oval Office in September.

The Libra hearings were tempestuous for Zuckerberg.

Congresswoman Alexandria Ocasio-Cortez hit him with a series of challenging questions during the hearing.

The 30-year-old New Yorker criticised Zuckerberg for failing to deal with political misinformation that was spread on Facebook during the 2016 election campaign. 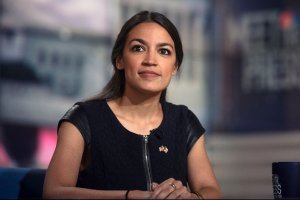 AOC hit Zuckerberg with hard questions at the hearing

Zuckerberg stated in the hearing that Facebook does not fact-check political adverts on the social media platform.

Zuckerberg also came unstuck on the issue of his alleged ties to political hate groups, with Facebook’s official fact-checker having connections to white supremacists.

“Can you explain why you have named the Daily Caller, a publication well documented with ties to white supremacists, as an official fact-checker for Facebook?” Ms Ocasio-Cortez asked.

And Congressman Brad Sherman told him Libra will facilitate unlawful behaviour, including the drug trade.

He said: “You’re going to be making powerful burglary tools and let your business partners commit the burglary.

“Your whitepaper says your business partners will use your tool to have anonymous accounts.

“How do you ‘know your customer’ with anonymous accounts?”